Earlier this month I participated in SOMArts Community Center’s show “MOMENTS (Bringing Back the Now)”. At the opening, Justin Hoover, the newly hired director of the gallery space, re-created the 100 Performances for the Hole that he formerly curated out of his Garage San Francisco’s Pacific Heights Neighborhood.

For 100 Performances for the Hole Take-Two, the dimensions of the hole were expanded, and moved from an automotive trench to a sand casting pit.

I issued four instructions to the group: 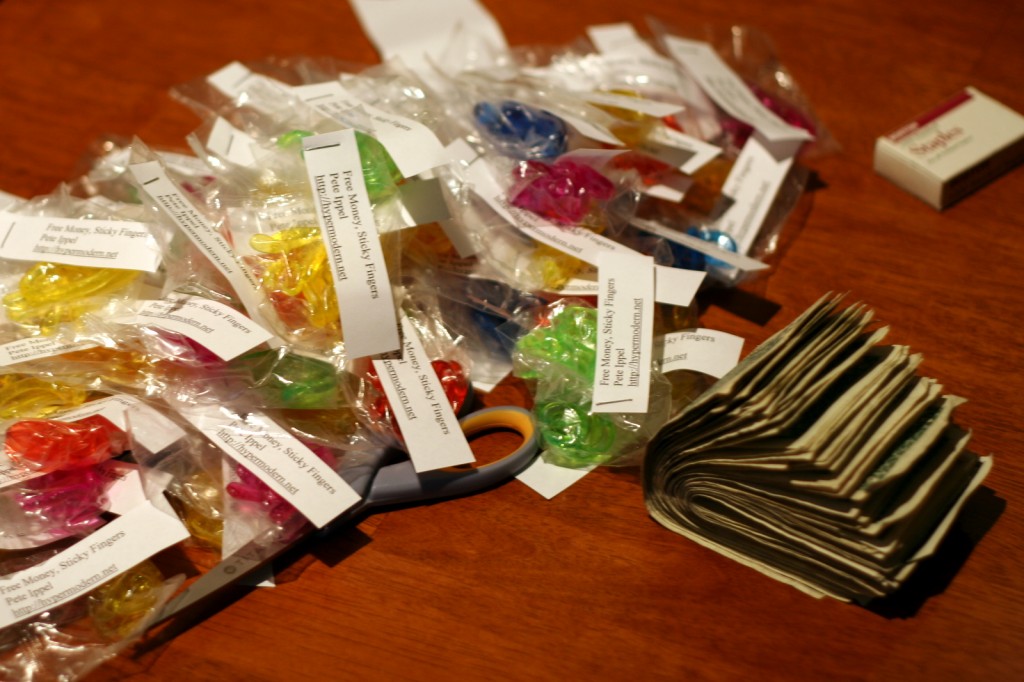 A Day in San Francisco from Rossita Dove on Vimeo.

In addition, there is a cameo appearance of “Free Money, Sticky Fingers” toward the end of the short video “A Day in San Francisco” by Rossita Dove.

Check out the Photos and the press release (below) for more information about the exhibition.

100 Performances for the Hole – Take Two is the opening event (#1 of 3) of a month long exhibition called: MOMENTS (Bringing Back the Now). This show features a series of live art events that transform the gallery into a contemporary art laboratory exploring the intersection between visual mediums, performance art, and time-based sculpture.

Conceived of by SOMArts Curator and Gallery Director Justin Hoover, this exhibition examines the state of contemporary live art in the Bay Are by inviting the collaboration and participation of over 100 performance artists working in a variety of styles and methods. MOMENTS (Bringing Back The Now) is structured around three events examining performance art today: a series of 100 two-minute, site-specific performances performed one after another, a ballet with heavy machinery that was inspired by a previous performance choreographed by youth in a housing complex, and a series of time-based and mobile/ephemeral sculptures.

According to curator Justin Hoover “the lived moment is often greatly under-appreciated, in life and in the arts. Largely, in the mind of the public, fine art is relegated to objects and environments, and rarely is the emotionality and the nuance of a lived moment evidenced as an artwork. In the contemporary moment, art has long surpassed the realm of objecthood and some of the most innovative new forms reside i experience. By highlighting local performance artists and performative installations, SOMArts gives Bay Area artists and audiences a chance to exchange ideas and build attention around a developing form that rarely finds its way into a gallery. MOMENTS (Bring Back the Now) brings immediacy back to the experience of contemporary art viewership.”

Additionally, this exhibition will work in conjunction with the Bay Area Video Coalition (BAVC) to upload this live program directly to cable television.

100 Performances for the Hole – Take Two breathes fresh life into a formerly disused part of the SOMArts Main Gallery, namely what remains of the mechanics pit from the building’s former life as the Union Machine Company. Through a simple hole and an open call for ephemeral performance artwork, 100 Performances highlighting the contemporary timescape of today and invigorates a wide swath of the performance art community, one that is vibrant, innovative, playful, and elusive. This tour-de-force of the ephemeral is juried by Kevin B. Chen, Peter Foucault, Justin Hoover, Jackie Im, Lex Leifheit, and Lucy Kalyani Lin.