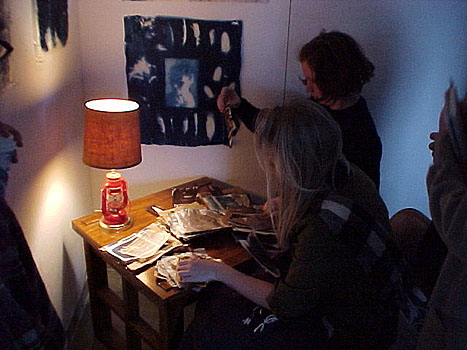 The intent of this project is to explore the fragility of memories and how they relate to the natural world inasmuch as they can be collected and treasured. Because of childhood experiences of taking “nature hikes” with my mother and father , I was encouraged to pick up anything I found interesting to take it home and explore it further. Feather and leaves are fragile in that they fall off of the living objects, i.e. a tree or bird, and are pieces of that individual animal or plant that each have an individual beauty.

Similarly the images I have created of Hannah and my Father have been collected, my Dad’s images from the attic, and Hannah’s were more of an active collecting and recording of a moment / event with my eye through a camera. Now printed on fragile canary paper, and brown paper they mimic the color and fragility of fallen leaves but same the same preciousness…arranged in stacks on a small card table, lit with an electric lamp given to me from my father that mimicked the old kerosene one we used to take camping.