Back in 2001-2002 I was experimenting with 3D Internet technologies. I was using Active Worlds in an artistic context as well as toying with Viewpoint and Cult 3D. The Cult 3D plugin works on Internet Explorer, and Firefox. Viewpoint Player works in many browsers as well.

The above is a model of a demon maped with my face and the sound is a distorted recording of my laugh. 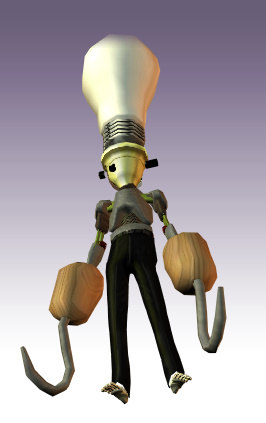 The Hook-Man avatar I created to stand in for me in the online realm. He moves and groves, and you can make him dance by launching the viewpoint application.

This is part of the Active Worlds environment I developed with Marcia Lyons. We used it to display students’ 2d work in a 3D world, with schedued classes online. It was a precursor to Second Life.